You are currently browsing the monthly archive for May 2017.

The book GPU Zen is out. Go get it. This is a book edited by Wolfgang Engel and is essentially the successor to the GPU Pro series. Github code is here.

(Update: there’s a call for participation for GPU Zen 2.)

Full disclosure: I edited one small section, on VR. I forget if I am getting paid in some way. I probably get a free copy if I ask nicely. But, the e-book version is $9.99! So I simply bought one. Not $89.99, as books of this type usually are (even for the electronic edition), but rather?the price of two coffees.

It’s a Kindle book. Unlike the GPU Pro?and ShaderX books, it’s self-published. It’s mostly meant as an e-book, though you can buy a paperback edition if you insist.

So what’s in the book? Seventeen articles on interactive rendering techniques, in good part by practitioners, and nine have associated code. The book’s 360 pages. As you probably know from similar books, for any given person, most of the articles will be of mild interest at best. There will be a few that are worth knowing about. Then there will be one or two that are gold, that help with something you didn’t know about, or didn’t know how to do, or heard of but didn’t want to reinvent.

For example, Graham Wihlidal’s article “Optimizing the Graphics Pipeline with Compute” is a much-expanded and in-depth explanation of work that was presented at GDC 2016. Trying to figure out his work from the slideset is, I guess, theoretically possible. Now you don’t have to, as Graham lays it all out, along with other insights since his presentation, in a 44 page article. At $89.99, I might want to read it but would think twice before getting it (and I have done so in the past – some books of this type I still haven’t bought, if only?one article is of interest).

The detailed explanation of XPerf, ETW, and GPUView in the article by James Hughes et alia on VR performance tuning might instead be the one you find invaluable. Or the two articles on SSAO, or one on bokeh depth-of-field, or – well, you get the idea. Or possibly none of them, in which case you’re out a small bit of cash.

For the whole table of contents, just go to the book’s listing and click on the cover to “Look Inside.”

Me, I usually prefer books made of atoms. But for technical works, if I have to choose, I’m happier overall with electronic versions. For these “collections of articles” books in particular, the big advantage of the e-book is searchability. No more “I vaguely recalls it’s in this book somewhere, or maybe?one of these three books…” and spending a half-hour flipping through them all. Just search for a term or some particular word and go. Oh, one other cute thing: you can loan the e-book to someone else for 14 days (just once, total, I think).

At $9.99, it’s a minimal-brainer. Order by midnight tomorrow and you’ll get the Ginzu knife set with it. I’ll try to avoid being too much of a huckster here, but honestly, so cheap – you’d have money left for Pete Shirley’s ray tracing e-books, along with Morgan McGuire’s Graphics Codex. I like low-cost and worthwhile. Addendum:?if you do buy the paperback, the Kindle “Matchbook” price?for the e-book is $2.99. Which is how I think reality should be: buy the expensive atoms one, get the e-book version for a little more, vs. paying full price for each.

Haven’t done any “seven things” for a year, so it’s time. This one will just be stuff from the wonderful site This Is Colossal, dedicated to odd ways of making art.

I was entertained to see that the new NVIDIA HQ is triangle inspired.?Great quote?from an interesting article about new technology company offices:

“At this point I’m kind of over the triangle shape, because we took that theme and beat it to death,” admits John O’Brien, the company’s head of real estate, who pointedly vetoed a colleague’s recent suggestion to offer triangle-shaped water bottles in the cafeteria. 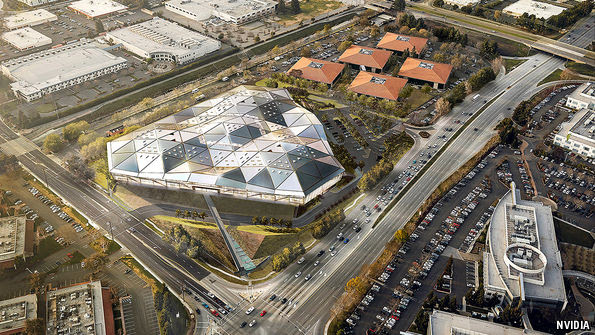